January 20, 2010
Sooo she might not ever remember her first play date but it was pretty stinkin hilarious and her momma will never forget it! Jackson Wade came over with his momma today and we all had a blast. Kate was all smiles at first with Jackson until we put both of them in her 'Fairyland Gym'. She did not think it was cool at all. Jackson loved smacking fairy and all the bugs and Kate was not having it. We need to work on her sharing skills! :) Heidi and I put Kate and Jackson in her crib for some pictures and first Jackson tipped over and a second later Kate went down. So wish I could have gotten it on film. Classic. Kate was once again very upset about sharing her bed. She knows that boys are not aloud in her bed and was throwing a fit about it. Jackson was so concerned with Kate's screaming. He had his hand on her face and then her shoulder. Too funny for words. Kate has taken 2 naps since Jackson has gone home. She is completely worn out. Maybe we need to have play dates more often! :) Thanks for coming over Heidi and Jackson. We had so much fun! 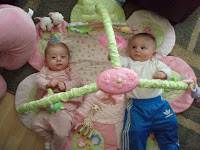 Look at Jackson checking her out.. 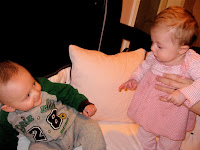 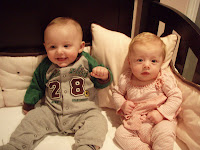 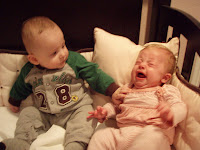 November 24, 2018
Remember that one time my husband bought a tv wall mount and then I decided we needed a new tv stand? And then it made me realize our dark furniture would look way better if I lightened it up? And then it was time to get rid of the old dark throw pillows and dark rug? And then all of a sudden that fireplace looked so out of place. So we gutted it.  All because we put the tv on the wall!  Here’s a little walk down our DIY family room makeover.  Before .  I started with this old corner cabinet that i got for free years ago and painted chocolate brown.  I dusted her off and went to town with chalk paint.  Then I got rid of the old dark rug and started changing out our throw pillows.  Then it was onto the fireplace.  Before   Chris took out part of the wood floor to extend the floor of the tiny fireplace.  We also cleaned out the fireplace and sprayed it with cream paint that can withstand 1,200 degree temperatures.  And then we sucked out the old volcano rock and put in this fire glass fr
15 comments
Read more