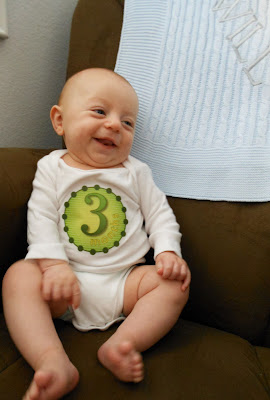 Our William is possibly the happiest baby I've ever known. He is Mr. Mellow and holy cow has he captured my heart! I could not be more crazy over this boy! He is FILLED with smiles and is just starting to coo. We have some pretty awesome conversations. If someone overheard me talking to him they would probably think I'm crazy. This is one of my favorite ages, he's still tiny but is starting to interact and recognizes our faces and voices. SO much fun!

This boy has two favorite things. Sleeping & Eating. They happen to be my favorite things too! He's been sleeping through the night since 8 weeks and he finally willingly took a bottle for the first time last night. He knows what he likes and it will be a miracle if he takes formula one day! He's chunkin' out and one of these days I'm going to eat one of those delicious rolls! Will weighed in at 14 pounds this week! He's going to pass his big sister up in no time who is only 29 pounds at 2 and a half!

Our little man is starting to teethe and is chewing on anything he can get in his mouth! He is also quite the drooler which his big sister was not! He is a major snuggle bug and I find it hard to put him down during the day. Will gave us his first belly laugh over the weekend when his daddy was tickling his tummy. The laughs quickly turned into grunts, clearly he was not entertained. He gets that from his momma.

I am amazed daily at all the resemblances I see in his sweet face of ones I love. He has my grandpa Marshall's smile, looks like my uncle john did when he was a baby, and has Chris' eyes and eyebrows. One of these days I will post my baby picture and you'll see that he looks just like I did when I was a baby.

The Lord is so good and His timing could not have been more perfect in sending our Will to us. The joy that he has filled our hearts with along with his big sister is beyond what I deserve. I'm so thankful that I get to spend day in and day out with them. These days are passing by too fast and I am doing my very best to savor every moment with our two blessings. 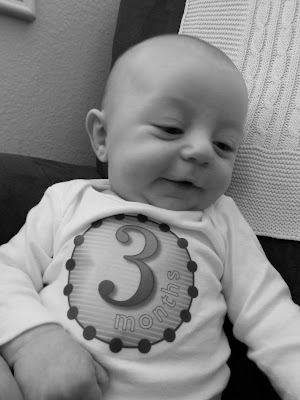 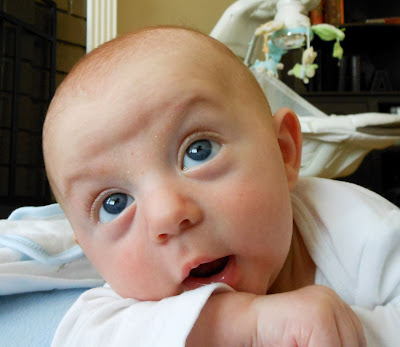 November 24, 2018
Remember that one time my husband bought a tv wall mount and then I decided we needed a new tv stand? And then it made me realize our dark furniture would look way better if I lightened it up? And then it was time to get rid of the old dark throw pillows and dark rug? And then all of a sudden that fireplace looked so out of place. So we gutted it.  All because we put the tv on the wall!  Here’s a little walk down our DIY family room makeover.  Before .  I started with this old corner cabinet that i got for free years ago and painted chocolate brown.  I dusted her off and went to town with chalk paint.  Then I got rid of the old dark rug and started changing out our throw pillows.  Then it was onto the fireplace.  Before   Chris took out part of the wood floor to extend the floor of the tiny fireplace.  We also cleaned out the fireplace and sprayed it with cream paint that can withstand 1,200 degree temperatures.  And then we sucked out the old volcano rock and put in this fire glass fr
11 comments
Read more